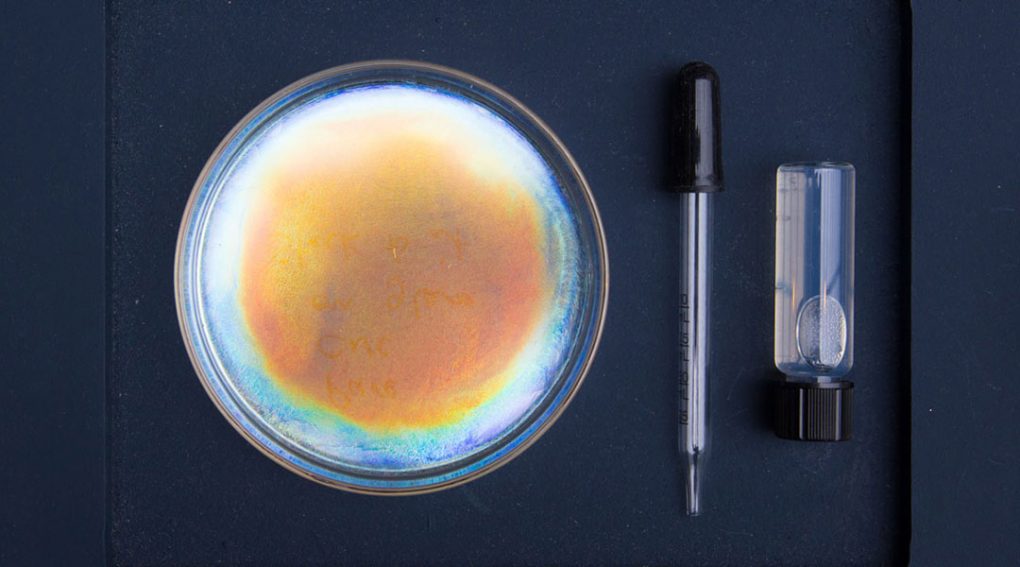 Elissa Brunato has developed sustainable sequins that shimmer without the use of chemicals. We talk to the designer – a runner up in the MullenLowe NOVA Awards, and winner of the Creative Review Innovation Award – about her work.

For all their aesthetic appeal, sequins are pretty terrible for the environment. Most are made from petroleum plastics and synthetic resin – materials that are not only damaging to natural ecosystems but also to the workers tasked with sewing them on to garments by hand. Given the amount of sequins it takes to make a single garment – and the amount of sequinned items being made each year – this presents a pretty big problem.

But Central Saint Martins graduate Elissa Brunato is hoping to change this with her bio iridescent sequins. Brunato worked with material scientists at RISE Research Institutes in Sweden to develop sequins using cellulose derived from wood. By extracting and manipulating the crystal form of cellulose (a substance found in the cell walls of plants), Brunato and her collaborators have created sequins that shimmer without the use of added chemicals. These sequins are as lightweight as their plastic counterparts but are completely biodegradable and can be grown in moulds in as little as 24 hours.

Brunato is the winner of the 2019 Creative Review Innovation Award – a new prize founded in partnership with the MullenLowe NOVA Awards to celebrate creative projects which solve a problem. With her bio sequins, Brunato is hoping to help tackle a major issue in fashion and textiles – and show that natural materials can be just as beautiful as manmade ones. 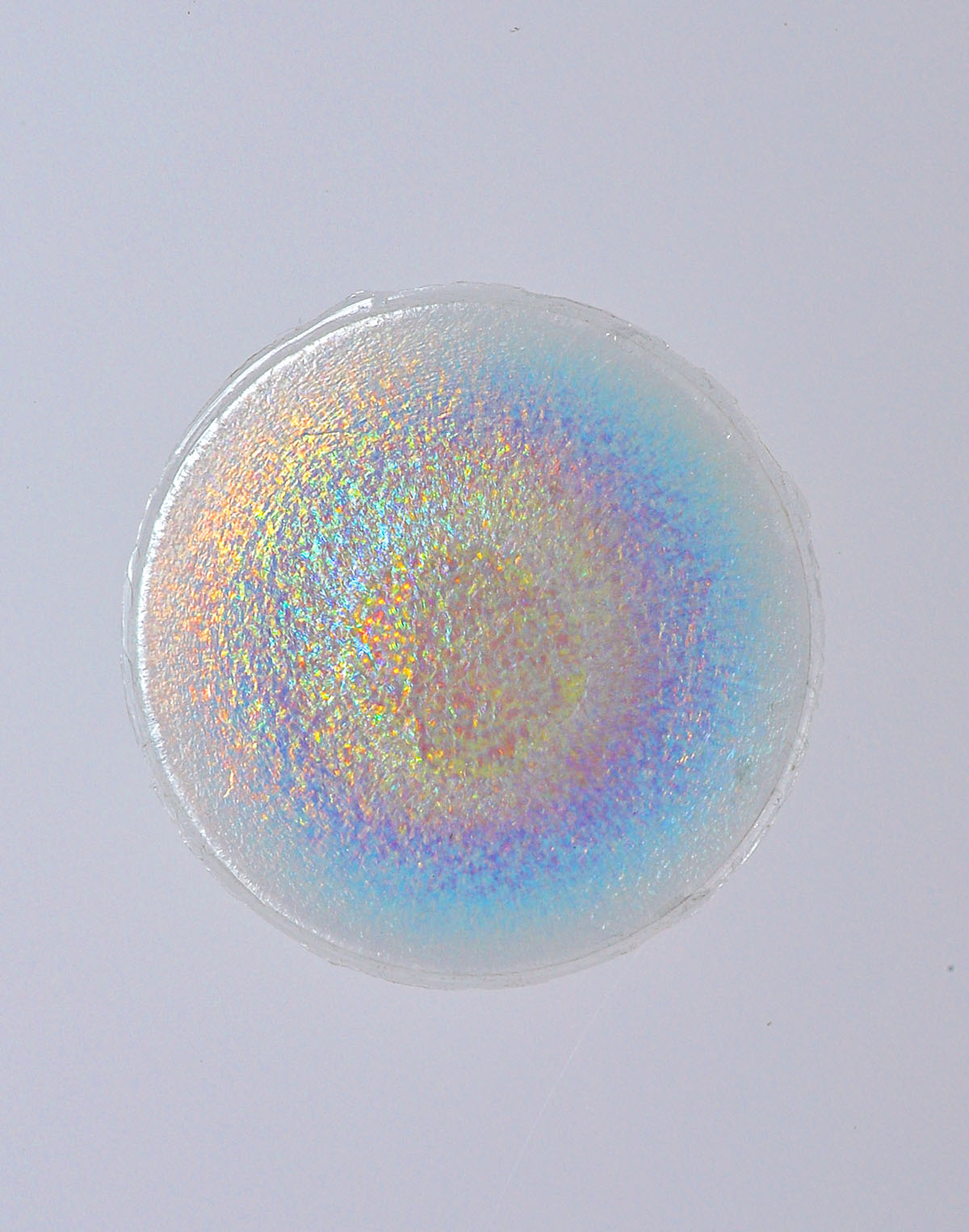 Brunato spent nine years working in the fashion industry before studying for an MA in Material Futures at Central Saint Martins. She started out as a studio manager before working in product development, production and design – an experience that gave her an insight into design and manufacturing processes and some of the main environmental issues facing brands and suppliers.

She specialised in embroidery design, an area where plastic use is rife. Even couture garments are typically made using plastic sequins and crystals – in part because plastic is lightweight and easy to produce, and also because there are few sustainable alternatives. “It’s a bit ironic that we’re making these really high-end pieces … but we’re always using plastic,” she tells CR.

As there’s currently no quick or easy way to remove hundreds of sequins or crystals from garments, clothing is rarely recycled: “All these little bits, these components, it’s completely unrealistic to recycle them off … so we have a huge amount of small pieces of plastic being sewn on a garment that then can’t be taken off,” she explains.

Waste is also a major issue at the factories used to make sequins. From visiting workshops and speaking with suppliers, Brunato discovered that waste components are often swept into the street throughout the day – meaning that the plastics and chemicals used to make them often end up in water streams and agricultural areas. 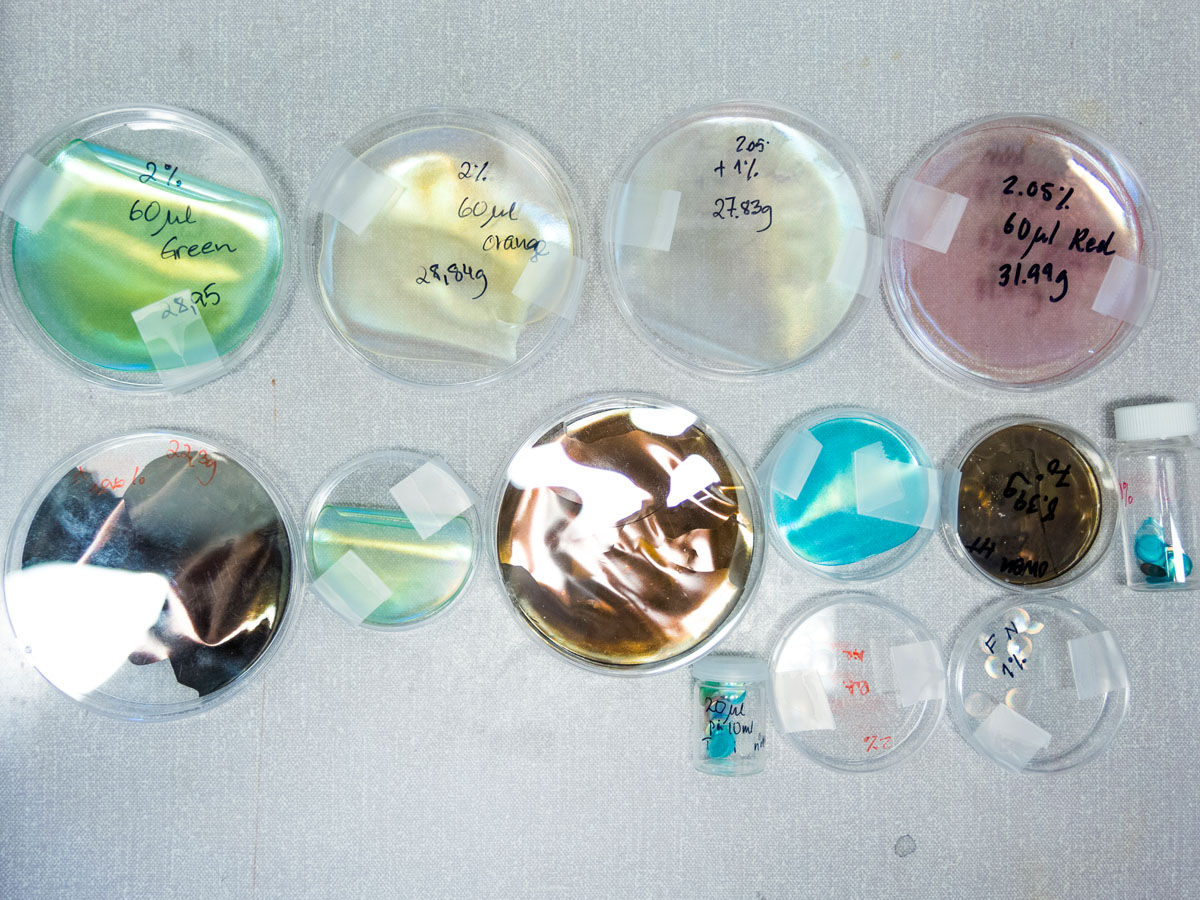 Brunato struggled to find clear evidence on the scale of this problem – and the damage it is having on natural ecosystems – but after speaking with numerous brands and manufacturers, she discovered there was a clear need for a more environmentally friendly solution. She researched alternatives and found that cellulose presented “huge scope for innovation”.

“Working with biotech, we can start to manipulate and extract different parts of the cellulose to create surfaces and materials beyond what we see as wood,” she explains. This is a growing area of innovation in material design, with designers using cellulose from algae and even waste coconuts to create sustainable clothing and textiles.

Brunato experimented with creating sequins in sheets before deciding to grow them in moulds: “I brought them to a sequin manufacturer in London and put [the sheets] through their industrial cutting machine, and it functioned really well – but at that point, I realised I had gone there with one material and come back with two: the sequins and the waste. Even though it’s a natural material and completely compostable, it just didn’t make sense to have the energy going into making that waste material. So that’s when I started looking at alternative methods.” 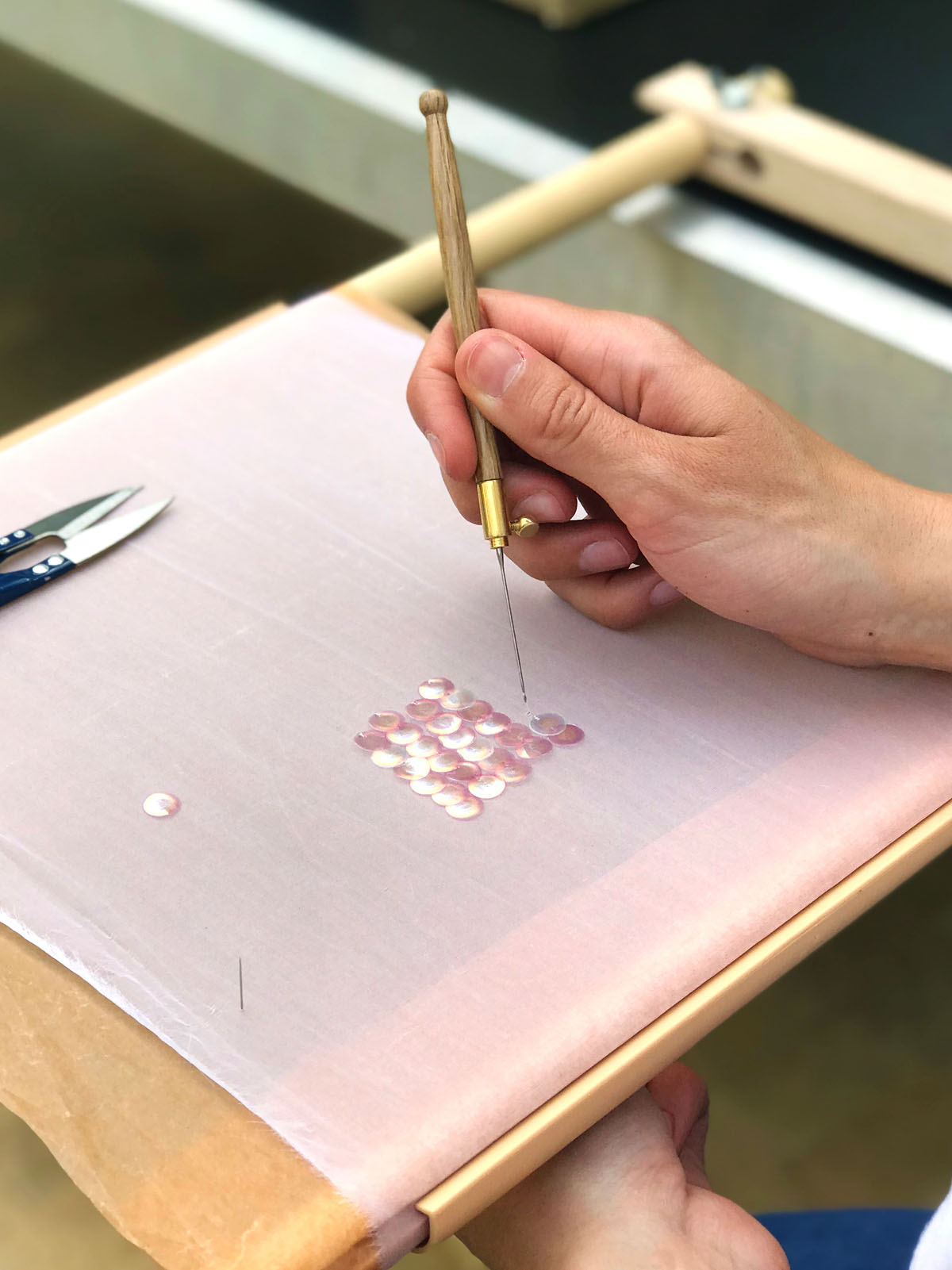 She spent the next few months developing sequins grown in moulds, before working with RISE to make sequins that shimmer. Materials scientists Hjalmar Granberg and Tiffany Abitbol helped her utilise cellulose’s ability to refract light to produce an iridescent effect much like the rainbow-coloured shimmer seen on beetle wings (which, coincidentally, were sewn on to garments in the Victorian era as a precursor to today’s plastic sequins).

“This was all still using this one material – so instead of having the complicated structure of the sequin with all its chemicals, its dyes and its finishes, I was able to get all of this with one material,” explains Brunato.

“The whole MA for me was a very hands-on process: I was making sequins from the first two months in … and then making refinements in the lab. We were working together quite solidly and tweaking the molecular level of the material to make them pliable enough – changing things on a molecular scale to control their thickness and the way that they form. It was all sped up with the knowledge of the material scientists I was working with – they work a lot with bio materials, so having them on board was really helpful to the project.” 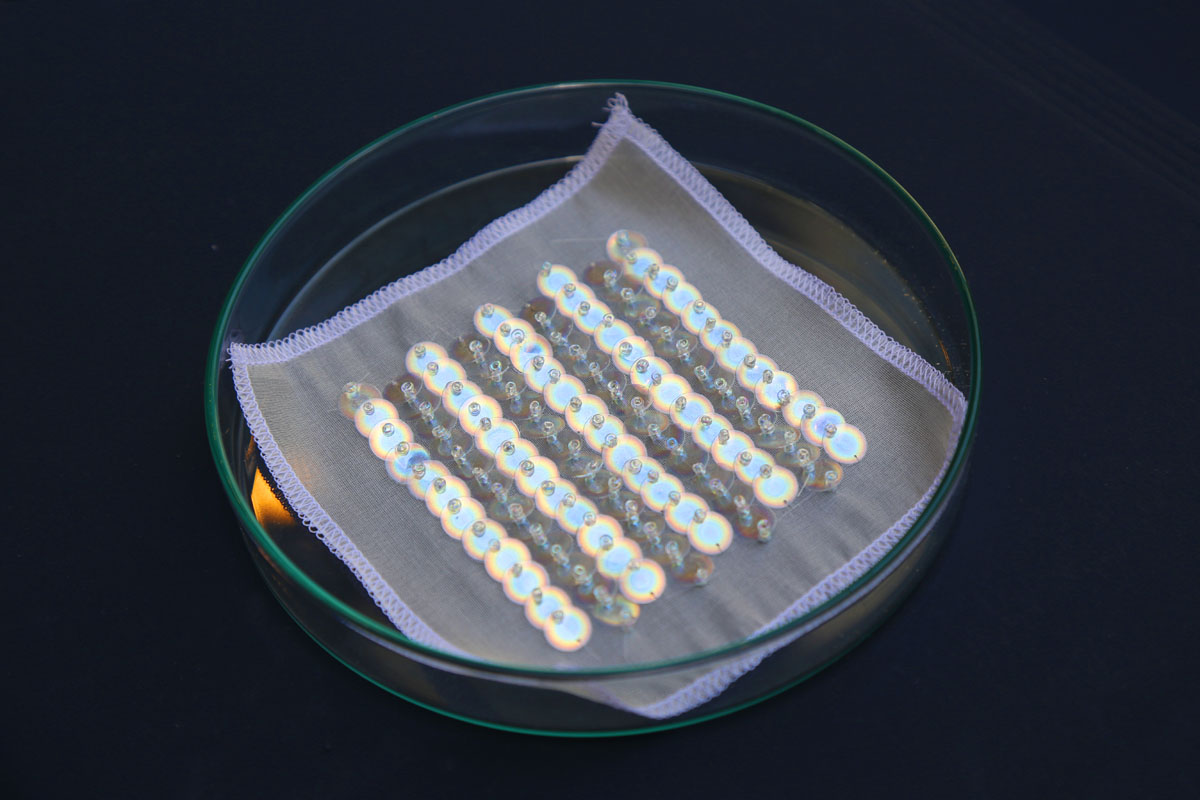 Brunato says she designed the project to be scaleable – from the outset, she set out to create sequins which could be grown relatively easily within the right conditions using an abundant natural resource. She also set out to create a “biological circular system” – one that wouldn’t generate waste or depend on brands having to adopt new recycling systems. She has just been awarded a Mills Fabrica residency in Hong Kong, where she’ll continue to refine and develop the sequins and explore how they could be integrated into existing supply chains.

The long term hope is that her sequins could be produced on a mass scale: “That’s how the whole project has been designed so now, it’s just [a case of] testing to see how that could actually work and what new manufacturing environment we’d need to have [for this to happen], because right now, I’m making them in a lab and it’s not suitable to upscale within a lab,” she says. In order for the sequins to be produced on a huge volume, Brunato says we would need to see a mix between a manufacturing space and a lab.

This, of course, would require significant investment from brands: Brunato admits that the complexity of global supply chains (particularly for larger brands producing garments on a massive scale) has made innovation slow, but she is positive that brands are recognising a need to work with more environmentally friendly materials and change their ways of working.

“There is definitely a lot of interest with designers wanting new materials that are better for the environment, but the way we manufacture things is so segmented that it doesn’t just require the need – it requires a lot of industry players to change the way they manufacture, and that’s a much harder and bigger thing to change,” she says. “It takes capital investment to start with, and I guess that’s why [change] isn’t happening as fast as we’d like. But the need is definitely there, and I saw that a lot from talking to embroidery suppliers. They’re asked all the time for materials that are just as lightweight [as plastic], but much better for the environment.” 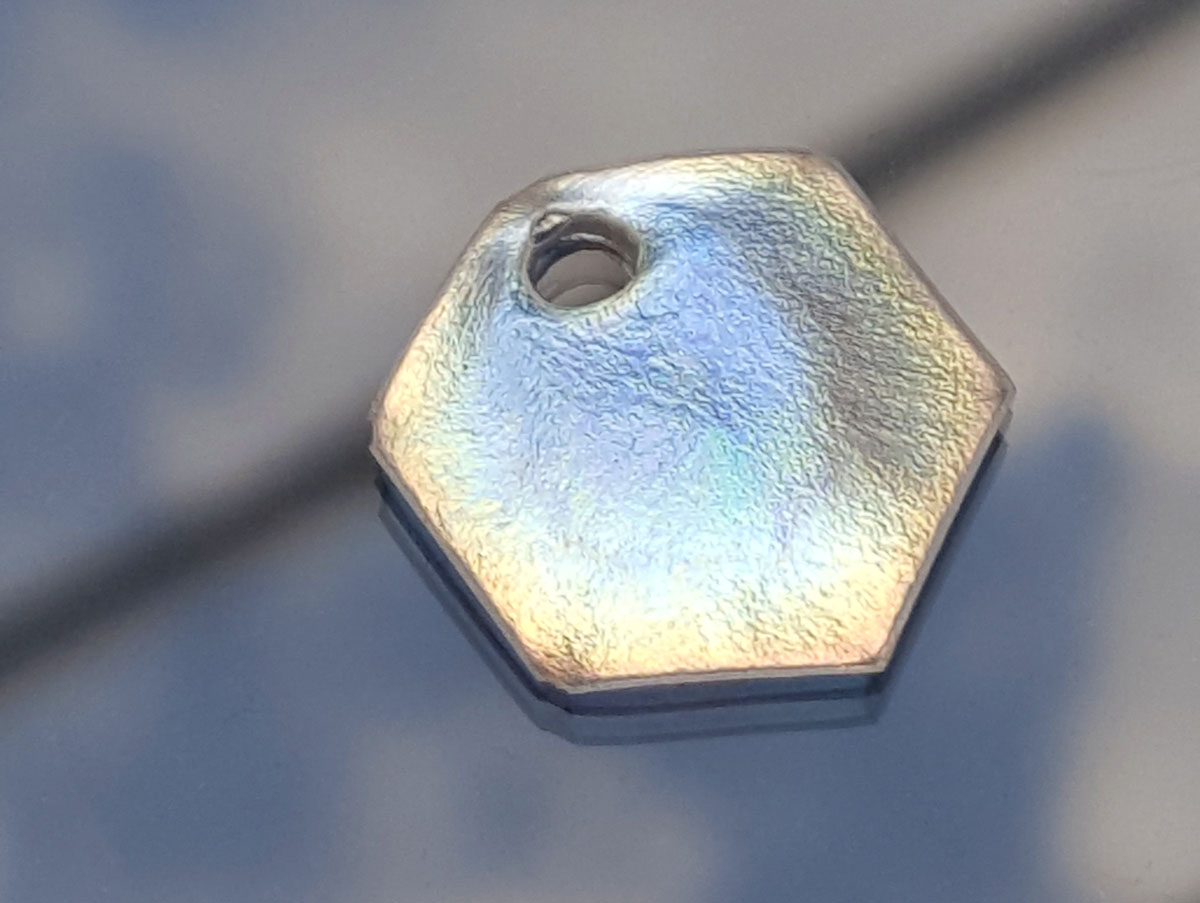 Alongside refining the sequins and investigating how they could be produced on a larger scale, Brunato is keen to explore how cellulose could be manipulated to produce specific colours or patterns.

Her project is one of a number of innovations that are challenging perceptions around sustainable materials: as Brunato points out, there was once a perception that to be sustainable, your products had to look somewhat boring – but as her bio iridescent sequins show, this is no longer true.

“The aesthetics was the driving force of this project – and I guess that comes from me having worked in the industry,” says Brunato. “No matter how sustainable something is, it won’t be used unless it looks beautiful. Traditionally, sustainability has been a bit stigmatised – [there was a perception] that if something’s sustainable, it has to be brown and beige, and there’s that aesthetic quality we sort of class as ‘oh, that must be a sustainable dye colour because its a bit more faded’, so I really wanted this project to push past those boundaries.” 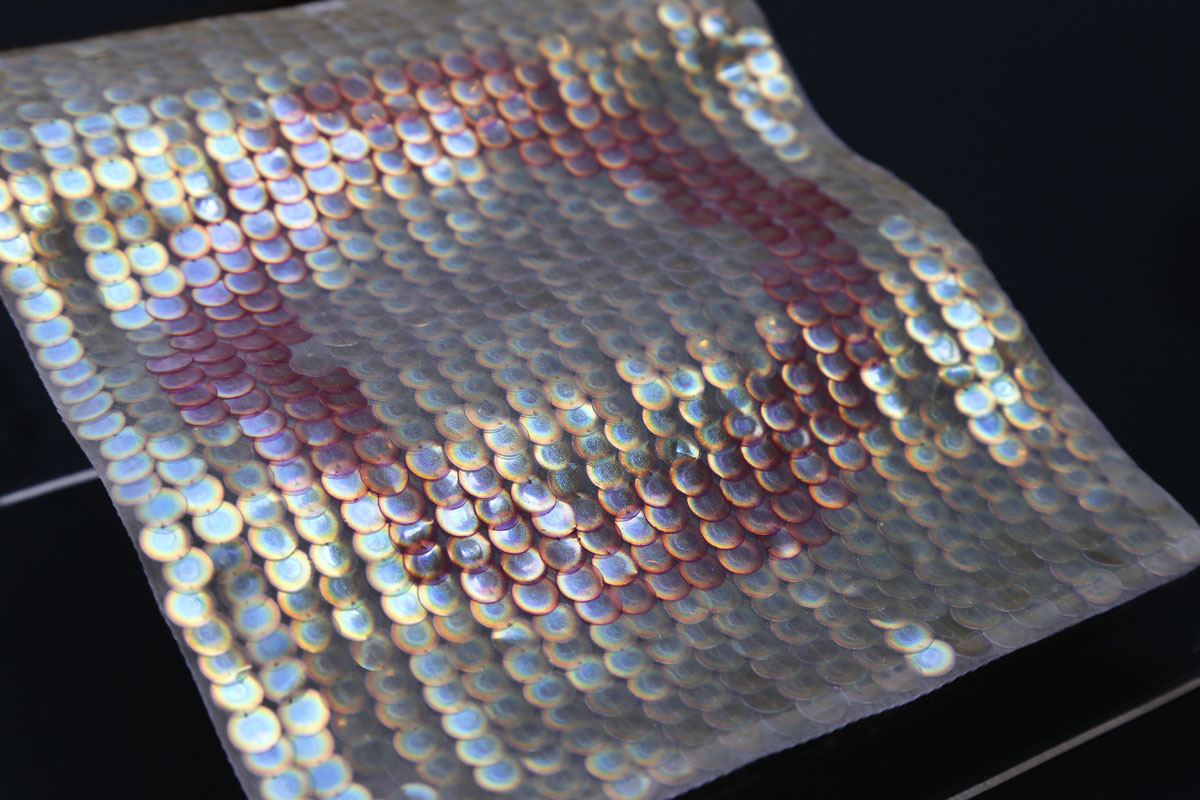 “When I took this project to Milan Design Week, we did a work-in-progress show there, and I had the first samples of the sequins. So many people were walking past asking if it was recycled plastic – and that was quite a nice realisation that I’d broken that barrier of what a sustainable material needs to look like.”

There’s a lot of work to be done before Brunato’s sequins could be implemented on a large scale – but with brands facing growing pressure from consumers to adopt more sustainable practices, and an increasing awareness of the damage caused by microplastics, perhaps we could see more companies cutting back of their use of plastic embellishments and using natural or responsible materials instead.