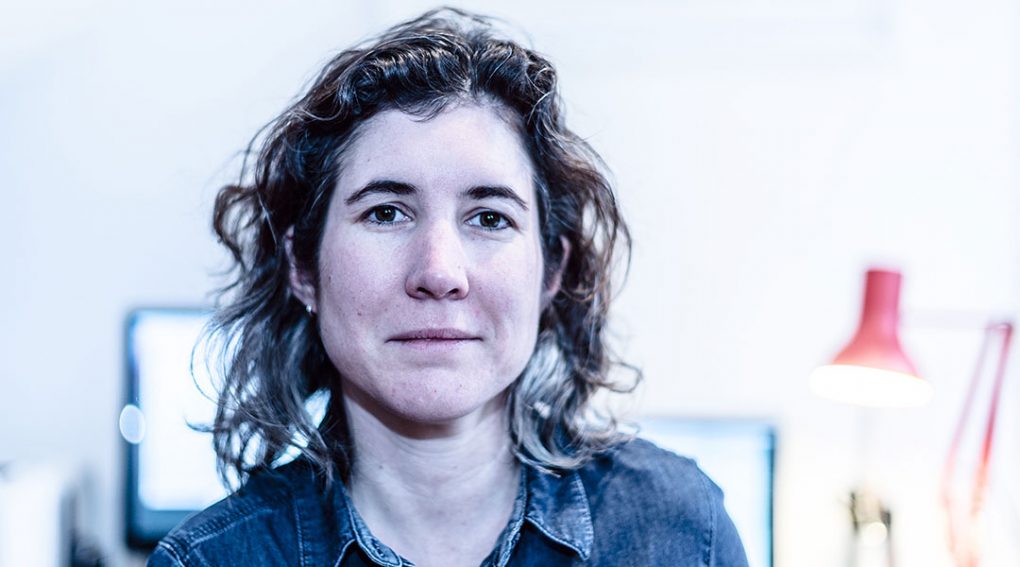 Hannah Scott is a visual artist with an interest in the creative relationships between art and science. In 2017, while she was a graduate of the MA Art and Science programme at Central Saint Martins in London, she was awarded a MullenLowe NOVA Award for her ongoing project exploring the impact of plastic on the environment.

Today, her practice incorporates installation, film, photography, performance and painting, and she specialises in exploring ways of visualising and communicating environmental change. She’s currently working on a year-long project called ‘All this Stuff is Killing Me‘, exploring ideas related to mass-consumption, climate change and plastic pollution.

This year, Hannah will join the judging panel for the 2019 MullenLowe NOVA Awards, part of the exclusive partnership between global communications network MullenLowe Group and Central Saint Martins.

We chatted to Hannah about what drives her work, the physical practice of producing it, and how it connects together the environment, consumerism and her own bereavement.

How did you first become interested in making art about climate change?

While I was studying for my MA in Art and Science at Central Saint Martins, I started to think about climate change in terms of my carbon footprint and my lifestyle. I hadn’t really thought about it before, and it wasn’t something I was super-aware of, but the more I researched, the more I realised how much of a pressing issue this is, and it led me to start questioning my core values.

At the same time, I lost my mum, (and I’d previously lost my dad), so I was going through this period of challenging myself, thinking about where I’d come from, my identity and what to do with all the things I’d inherited from my parents: a lifetime’s worth of stuff. It was the kind of stuff that we define ourselves by, and I found it really difficult to go through the process of trying to separate myself from objects, decide what to hold on to and how to keep those memories. 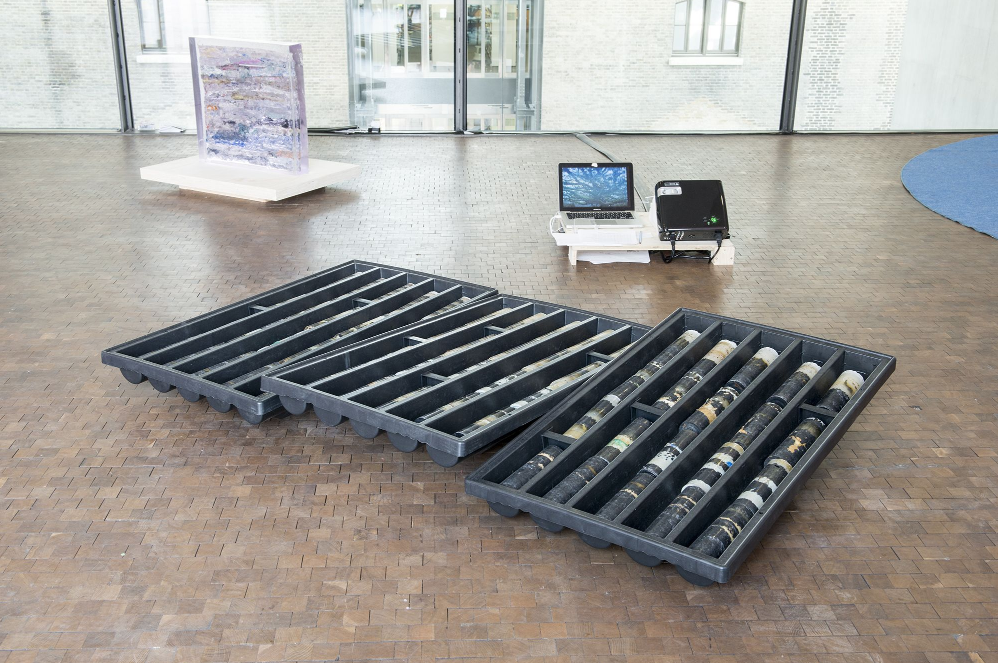 How did you come to the specific topic of plastic pollution?

In 2016 I collaborated with the Government Office for Science on their annual report focusing on waste, titled ‘From Waste Resource to Productivity’. This is what initially focused my attention from the wider narrative of climate change to plastic pollution. The subject of plastic and making the connection between our lifestyles and how it affects the wider environment really resonated with me, and seemed like a more tangible story to engage with people in Britain.

I also went to a talk on the subject of microplastics by Dr Stephanie Wright at the Wellcome Institute that really inspired me. I spent a lot of time looking at scientific papers and worked with Dr Wright to understand her research because I wanted to base my projects on hard science.

For example, ‘270 Single Uses’, a one-off installation in King’s Cross using 270 ice casts of plastic bottles, was inspired by a computer model that illustrates how plastic waste is distributed globally by ocean currents, and which shows that marine plastic debris from the UK travels to the Arctic in just two years. 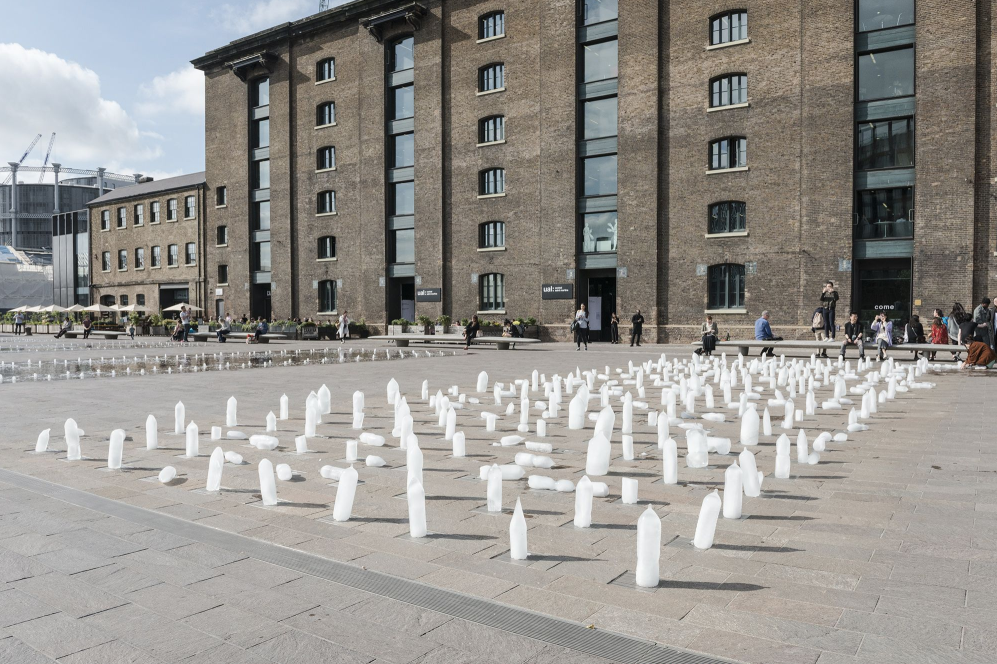 How much work is involved in creating these pieces?

A lot. They’re all logistically quite difficult. They can take months to make, and all the research and time spent developing the ideas before can be very involved as well.

Each piece is quite different. They’re not necessarily things that I’ve ever done before so figuring out what and how to make something can be a bit of a stab in the dark. But one of the things I took from my Art and Science MA was learning to trust what you’re doing. You have to get out of your comfort zone and experiment.

I try to be quite succinct in my work and the messages I’m offering, but to achieve all of that can take a lot of time and effort. For example, sourcing artefacts or materials that I think are authentic to the subject and that communicate what I want to say, or recognising that sometimes you can’t do it on your own. A big piece like ‘270 Single Uses’ would have been very difficult to put together without help.

You were named a Runner Up at the 2017 MullenLowe NOVA Awards for your student project ‘What Goes Around Comes Around’, which explored the relationship between consumer lifestyle in Britain and plastic waste in the Arctic Circle. What was it like to win?

It was amazing, and it felt like a massive accolade. You’re put forward by your tutors so that in itself is lovely feedback to get. Being successful and coming away with one of the Awards gave me a lot of confidence. It made me feel like what I was doing was valid and that I was going in the right direction. Plus, I also received a financial prize that helped me continue working and start a new project.

The prize money from the MullenLowe NOVA Award helped fund a trip to the Arctic. What was that like?

Really amazing. It was an artists’ residency, so I felt privileged to be there alongside so many accomplished artists in such an incredible place.

During the expedition, I collected daily atmospheric deposition samples for Dr Wright and her team at Kings College London, and they’re now using these to assess whether microplastics are actually contaminating the Arctic air. I also carried out a beach clean with the help of other people on the boat. 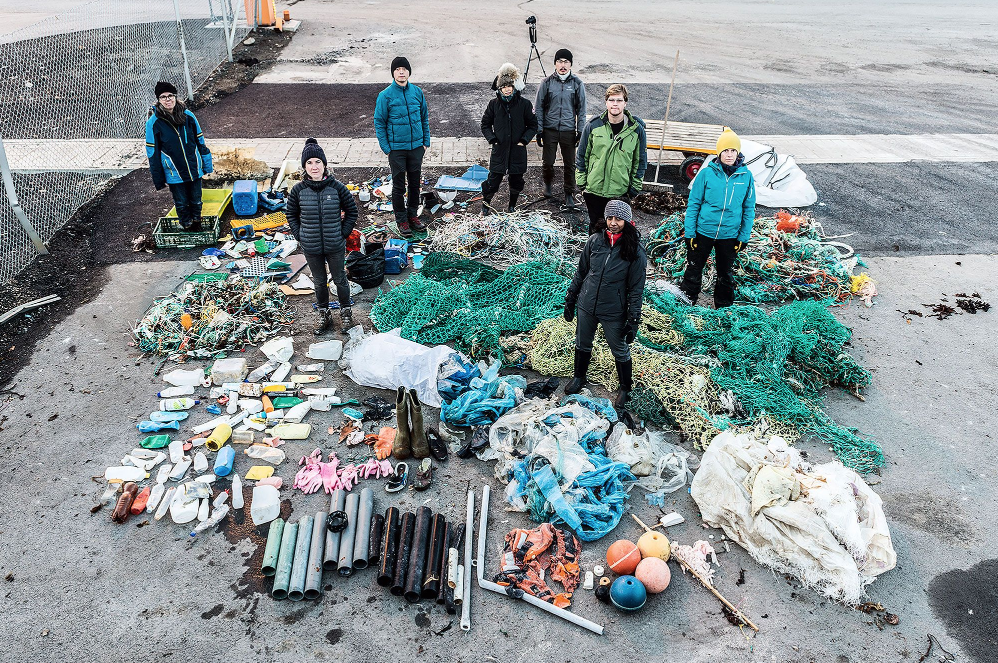 What other artists working in the environmental field do you admire?

Your latest project, ‘All this Stuff is Killing Me’, has taken you around the world. Can you explain what the project is about?

The basic premise was thinking about the relationship between mass consumption, plastic pollution and climate change.

There are three parts to this project. The first part was a low-carbon cycle tour of the UK. I visited a series of Amazon distribution centres, thinking about them as if they were cathedrals of consumption.

The second part was travelling on board a container ship for a month. This was about seeing behind that process of globalisation, by getting to know the people who work in that environment. 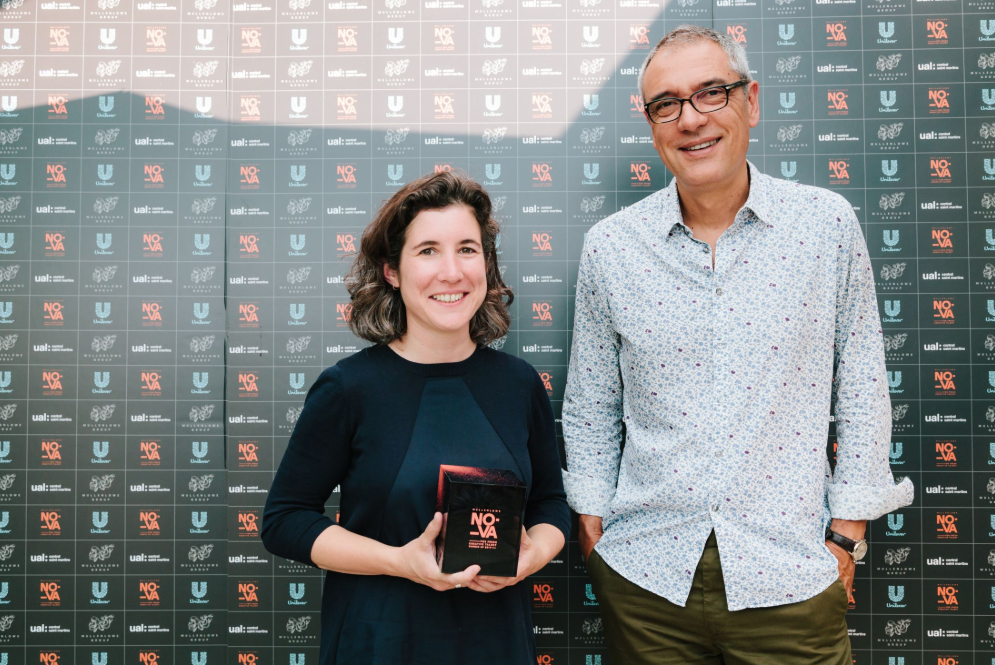 Receiving a MullenLowe NOVA Award in 2017

Then the third part was cycling around New Zealand. My mum was from there so it felt like a nice way to address bereavement and think about the parallels between the environment and my own personal loss while trying to do it in the most low-carbon way possible.

Getting away from all the material possessions back at home was an important aspect of the project – I took only the things I needed to survive. It’s allowed me to see everything in perspective, but it’s been physically challenging – I’ve cycled about 8,000km so far!

Sounds like a major expedition! What were the biggest challenges of actually achieving it?

It was tough. I started in the UK without any preparation and my fitness levels were zero. The bike and gear (including food and water) weighed around 50kg, so it was slow going, with a lot of aches and pains to overcome. I really had to change my mentality.

I had no previous experience of cycle touring, so I needed to acclimatise to spending long days on the bike, living in a tent, being alone sometimes for days, motivating myself to continue and believing in myself and the project. Not to mention learning to fix and service the bike!

I didn’t make any plans as I wanted the journey to unfold naturally – each day I had to find a route, somewhere to sleep, food and water. 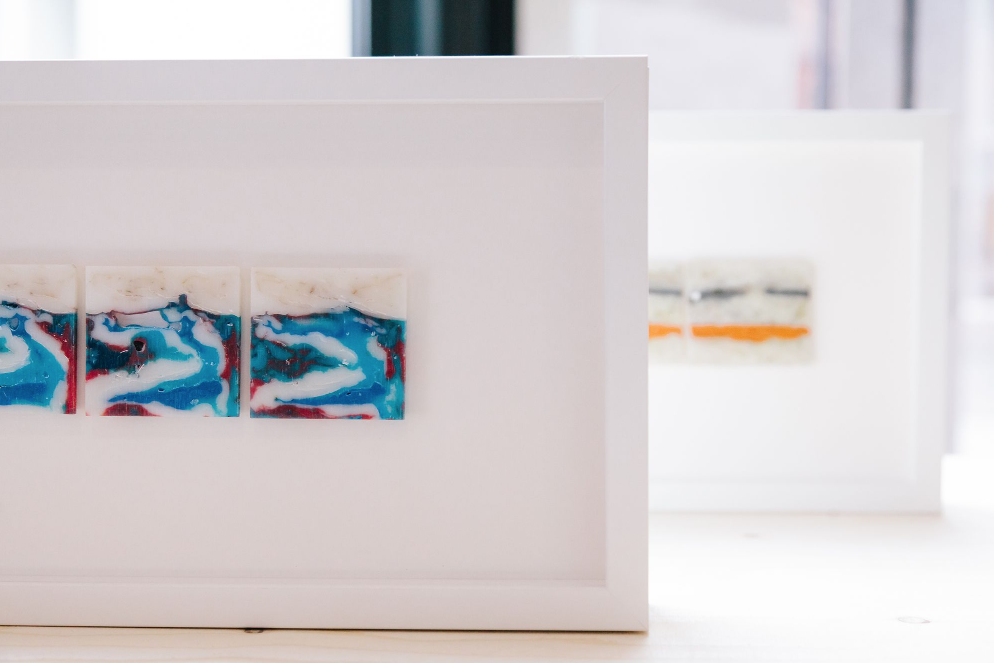 And what about the emotional side?

The journey was very emotional, particularly in New Zealand. I spent the first couple of months cycling and crying. I thought a lot about my parents and family while I was visiting places where they had lived, and at the same time about the changing landscapes I was travelling through, trying to confront my sense of both personal and environmental loss.

I wanted to travel on the cargo ship to see globalisation first hand, but also because my grandfather was a merchant seaman and my mother came to the UK from New Zealand by ship as a child. I wanted to know what it was like to be at sea for an extended period of time, to have an insight into my grandfather’s life, and to think about the journey my mother made.

The installation ‘All At Sea‘, a collaboration with artist Maria Macc, based on both artists experiences while Hannah was on board the cargo ship, will run from 14-16 June at The Crypt, St John on Bethnal Green, London.

For more information about the MullenLowe NOVA Awards visit www.mullenlowenova.com. The Degree Shows are open for the public to see the emergent work from Central Saint Martins students.

Degree Show One: Art is running from 22-26 May 2019, showcasing fine art in all its forms, from painting to photography and illustration to sculpture.