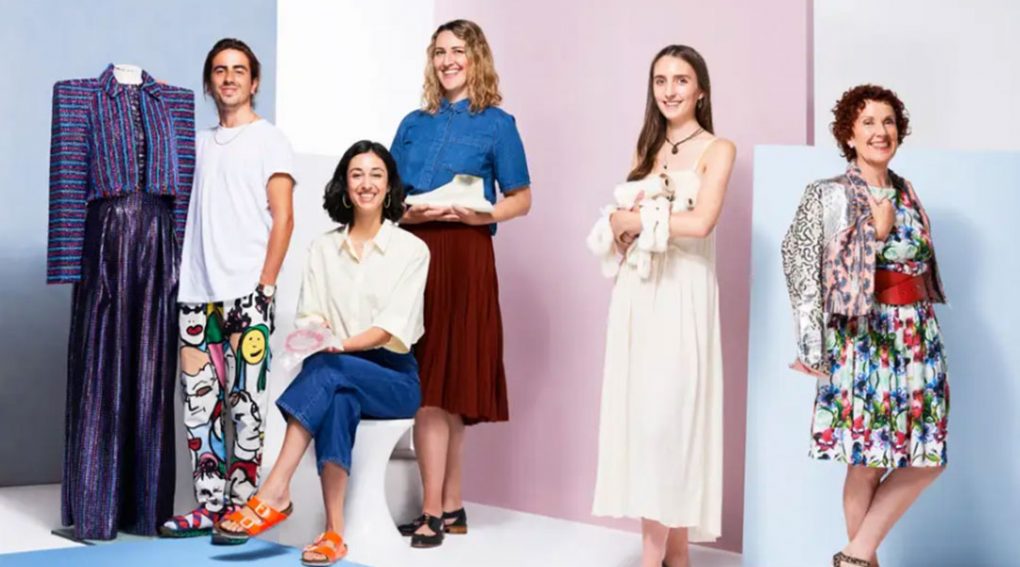 A biodegradable sequin that actually shimmers; a luxury jumpsuit exquisitely woven from defunct cassette tape and deadstock yarn otherwise destined for landfill; a pair of trainers grown from cellulose bacteria; a jacket woven from wool made from discarded pineapple leaves.

The materials we use for our clothes and interiors are undergoing a radical rethink. This is urgently needed if we are to meet our 2050 net zero carbon emissions target and reduce our addiction to cotton which requires unthinkable amounts of water, or polyester made from fossil fuels. Currently 21 per cent of the fibres used in our clothes is cotton and 65 per cent — and rising — are synthetics, mainly polyester.

Jen Keane is on a mission to challenge not just the material we use, but how things are made. She is growing trainers using a new form of microbial weaving where cellulose is grown to the shape required (in this case the upper of a shoe), with little or no waste.

After working in material innovation at Adidas for five years, Keane, 30, spent two years at Central Saint Martins (CSM) on the Material Futures MA, merging the worlds of fashion and science. But this shift into a more sustainable future is not going to happen overnight. While she says all the big corporations are looking into possibilities of bio textiles, “The difficult challenge is how to get those materials into the systems that they’ve built because they are used to a certain quality standard and certain testing standards that are based on synthetics — and those are really hard for anything else to stack up to.”

Keane is in the process of relocating her studio to Green Lab in Bermondsey, which is a new kind of maker space complete with a grow lab to make her bio textiles. Labs like these are starting to spring up around the city because increasingly that’s where our materials are going to come from.

It’s the sort of place you might also find Elissa Brunato. Her cellulose labgrown sequin will be made not from plastic, or even trees, but from “waste streams such as old paper, or used denim as well as vegetable skins”. And to reduce the fractured supply chains and convoluted journeys that materials like sequins go on before they are sewn on to a dress, her idea is that they will be lab-grown wherever the embroiderers need them — from locally sourced waste.

Having worked in embroidery for 10 years for brands from the high street to haute couture, Brunato, 30, is well aware of the devastating effect that sequins are having on the environment.

From the initial production to the embroidery ateliers and the washing machine, these tiny discs of petroleum-based plastic just get everywhere.

The problem is, we are suckers for sparkle. And that, thinks Brunato, is not going to change — which is why she set out to make an alternative that had all of the shimmer and none of the negative impact. “I wanted to try to make a solution that was attractive and that people really wanted,” she said.

While she was at CSM (she graduated this summer) Brunato was mentored by Stella McCartney’s head of sustainability Claire Bergkamp, and there is of course an enormous market for a compostable but sparkly sequin. However, Brunato estimates it could be at least five years before her sequin is a commercially viable product ready for use on an industrial scale. “At the moment, these developments are still far away from a mainstream garment,” she says. “But things can speed up unexpectedly and voices that speak about the future rise from a much younger part of our population than ever before. That makes me positive.”

There are as many solutions as there are problems. For Nathalie Spencer, 24, another graduate from this year’s Material Futures course at CSM, the challenge is to create a vegan material made using postconsumer food waste. She sourced pineapple leftovers from juice bars and markets around London and extracted the cellulose from the leaves. Her approach was singularly low-tech. “I used a spoon to scrape the flesh off the leaf and pick out the fibres,” she said. Working with spinners and weavers, she has produced a wool-like yarn which can be successfully woven or knitted just like any conventional wool — but with minimal environmental impact. Now she just needs some investment to take the idea to an industrial scale.

Spencer is now working on R&D with the queen of pineapple fibre, Dr Carmen Hijosa, whose company Ananas Anam produces Piñatex, a softly textured pineapple leather already on the market and used in a variety of products from interiors to accessories. The intensive nature of the meat industry, of which most leather is a by-product, is one of the chief catalysts for climate heating, contributing to mass deforestation in the Amazon, as well as 23 per cent of greenhouse gases. Leather might be durable but it is one of the most toxic and polluting materials to produce.

Hijosa set out to create a sustainable alternative to leather after consulting on the Philippines leather export industry in the Nineties. She was shocked by the toxic tanning processes used for leather production and went back to the Royal College of Art in her 50s to take a PhD to develop an alternative to both animal skins and oil-derived synthetic leather. So you will be seeing a lot more of Hijosa’s pineapple leather. You might have seen it already as part of the H&M Conscious collection earlier in the year. They made it into a pair of metallic cowboy boots. It’s also become part of the material selection in a range of brands, including the shoe brand Po-Zu and the start-up luxury vegan bag brand Mashu.

Piñatex has been designed for maximum benefit for the pineapple farmers in the Philippines where it is currently sourced and produced. The farmers sell the outer leaves of the plant, which are normally a waste product after the pineapple harvest, giving them additional income and supplying Ananas Anam with a lowimpact, renewable source of raw material for her leathers, which come in a range of juicy colours and metallic finishes.

Benjamin Benmoyal takes a different approach to his cloth, also woven from waste. His final fashion collection from CSM, It Was Better Tomorrow, was made using the tape from now defunct audio cassettes, which he originally sourced from the BBC when they moved from White City and sold off their old equipment. He liked the way it was shiny, as though the cloth was threaded with glitter. “Waste has become a valuable resource,” says the French-Israeli, who is 28. Like Brunato, he didn’t want his sustainable fashion to look any less seductive than the full-fat, fossil-fuelled variety. With support from a textile studio in Paris, he is sourcing considerable amounts of deadstock yarn to make his luxurious cloth. He will beshowing his graduate collection as part of the French 1.618 sustainable design collective at Premiere Classe during Paris Fashion Week this month.

This AI atelier is designing clothes for robots from sea waste Benmoyal is setting up his studio in Paris because it is easier to get cheap studio space as part of a drive to create affordable artist and designers studios in disused spaces. Mayor of London, take note.

“If you don’t know what the textile is made out of and how it is built, for me you are not a complete fashion designer,” says Benmoyal. “It’s like asking a chef not to know where his vegetables are from.”

Brunato agrees. “What makes me nervous is the general disconnection between everyday objects and the material resources they are made from,” she says. “At some point we lost this sense of understanding that our things, our clothing and our surroundings are drawn from the earth’s resources which have limits… Every resource we dump into landfill will be stuck there for years to come and that is something each of us should rethink now.”

Elissa Brunato was a 2019 Runner Up and winner of the Creative Review Innovation Award. Jen Keane was shortlisted in the 2018 MullenLowe NOVA Awards.

This article was originally published on the Evening Standard