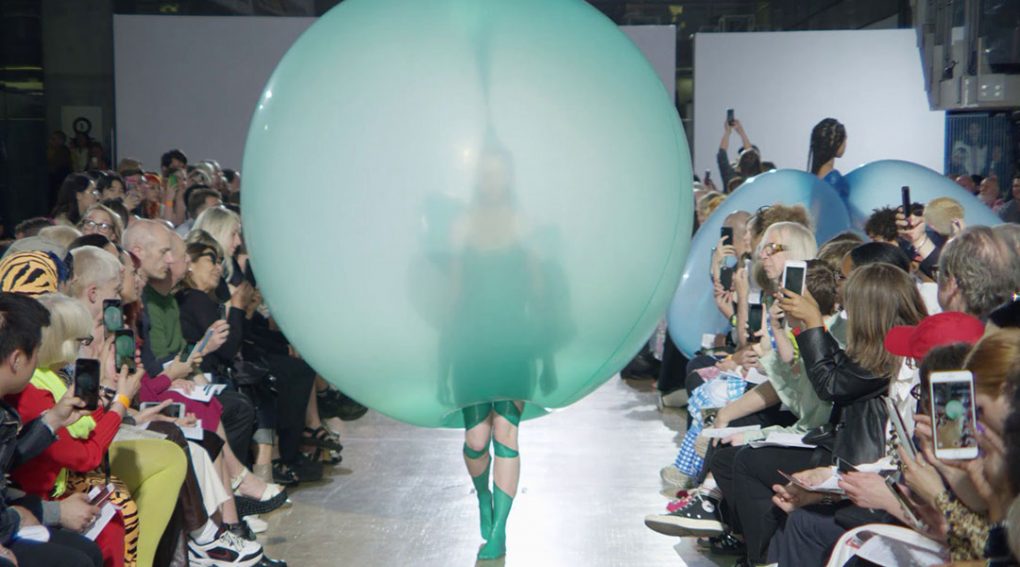 Fredrik Tjaerandsen’s degree show collection was an Instagram sensation, with balloon-like inflatable garments that combined fashion and performance. We talk to the designer about his work and what he plans to do next.

Fredrik Tjaerandsen’s work has been all over Instagram this summer. The Womenswear Design graduate received a standing ovation at his Central Saint Martins degree show – no mean feat when you consider that Saint Martins has tutored some of the fashion industry’s biggest names, from Stella McCartney to Alexander McQueen, Grace Wales Bonner and Hussein Chalayan.

His collection – a series of colourful latex garments – blurred the lines between fashion, sculpture and performance. Models walked the catwalk encased in transparent balloon-like bubbles before releasing a catch that caused them to deflate and transform into differently shaped outfits.

The collection caught the attention of fashion titles from Vogue to i-D. Tjaerandsen has since gained over 90,000 new followers on Instagram and received both the l’Oreal Professional Young Talent Award and the MullenLowe NOVA Award for his work.

It’s not hard to see why his designs have proved so popular. They’re brilliantly fun but they’re also wildly inventive, bringing an element of theatricality to the runway.

It’s also no surprise to find that Tjaerandsen counts Chalayan and McQueen among his inspirations – two designers known for using clothes to tell stories. Growing up, he says he was fascinated by art, sculpture and the human body, and wanted to be an artist – until Chalayan and McQueen’s work opened his eyes to the world of avant garde fashion. “I think it was the way their art is all about character, and using the human body as a medium, and working with materials … and also just the storytelling and the conceptual [aspect of it],” explains Tjaerandsen.

He moved to London from Norway to study a foundation course at Saint Martins before doing his BA in Womenswear. Throughout his degree, Tjaerandsen has continued to explore how he can incorporate sculpture and performance into his practice: “I’ve been trying to push my discipline and merge it with my other interests,” he says.

His collection, titled Moments of Clarity, was inspired by the idea of childhood memories. “I am deeply concerned with the relation between what is seen and unknown, between appearance and the anxiety that comes from exploring memories and the misty impressions of childhood to find meaning,” he says.

This idea is translated into garments that envelop the wearer – blurring their view of the outside world. The inflated bubble represents the idea of someone carrying around a memory, says Tjaerandsen, while the moment the bubble is released represents a moment of consciousness. “[It] is inspired by an almost indefinable moment when a human’s self-awareness becomes active and sentient,” he explains.

Pieces are made out of natural rubber sourced from Sri Lanka. Tjaerandsen created miniature test models before experimenting with life-sized designs, which allowed him to try out a range of materials before settling on colourful latex.

“That idea of capturing unclearness and working with transparency was something I started doing very early on,” he says. “In the beginning I would make moulds to create a whole bubble and I made a lot of miniature versions to explore different materials. I tried it with silicone but that didn’t really work so I tried latex and it worked really well.”

Working with rubber was a new experience for Tjaerandsen but with the help of various YouTube tutorials, he taught himself how to weld and shape the material.

“I did a lot of research online and bought a starter kit and just started making things myself. I was considering doing a course but I’m just not patient enough for that – so I watched a load of YouTube videos instead,” he explains.

“It’s very specific, the way you have to weld the seams – especially because with what I’m doing the seams have to be really strong, because [the expansion puts] so much pressure on them,” he adds. “The more and more I made the better I got at it, and I was able to push the design more and more.”

Creating the latch mechanism which causes the garments to deflate was another challenge – and one that Tjaerandsen says “came quite late in the process”. His early designs were fitted with a mechanism that could be twisted to let air in and out, but Tjaerandsen wanted to create a moment of surprise within his show by making bubbles open up on the runway. By creating a catch mechanism, he was also able to ensure that his pieces could be inflated and deflated more than once.

“I had to find a way to make [the bubbles] open, because I wanted to have that element of performance art – people were telling me you could just pop them, but that felt a bit destructive and I don’t really like that. Also I like the idea that they can be used again and again,” he says. Each bubble contains around 3,500 litres of oxygen, meaning they can be safely worn for several hours before being deflated.

Thank you @ryandgwhite for the feature up on @i_d

The vibrant colours are a nod to Tjaerandsen’s early years: “I wanted it to be quite vibrant – that comes from my research in terms of the visuals, but also from my childhood pictures and how it’s sort of about these childhood memories. But I didn’t want it to look childish,” he adds. “I wanted it to look very pure and clean. In the beginning, they were all supposed to be white, but when I got the material, the colours were really beautiful.”

Tjaerandsen says he has been overwhelmed by the reaction to his degree show and his new found Instagram following. “It’s been quite crazy really. My work has never been recognised like that before, so suddenly I feel like I’ve been given this huge platform. I suppose a lot of those are viral followers … but I’ve received so many opportunities and it’s given me a lot of courage to keep on going with this approach.”

For now, he’s hoping to continue developing his bubble designs (he is planning to put on a show this Autumn) before figuring out what he wants to do next. 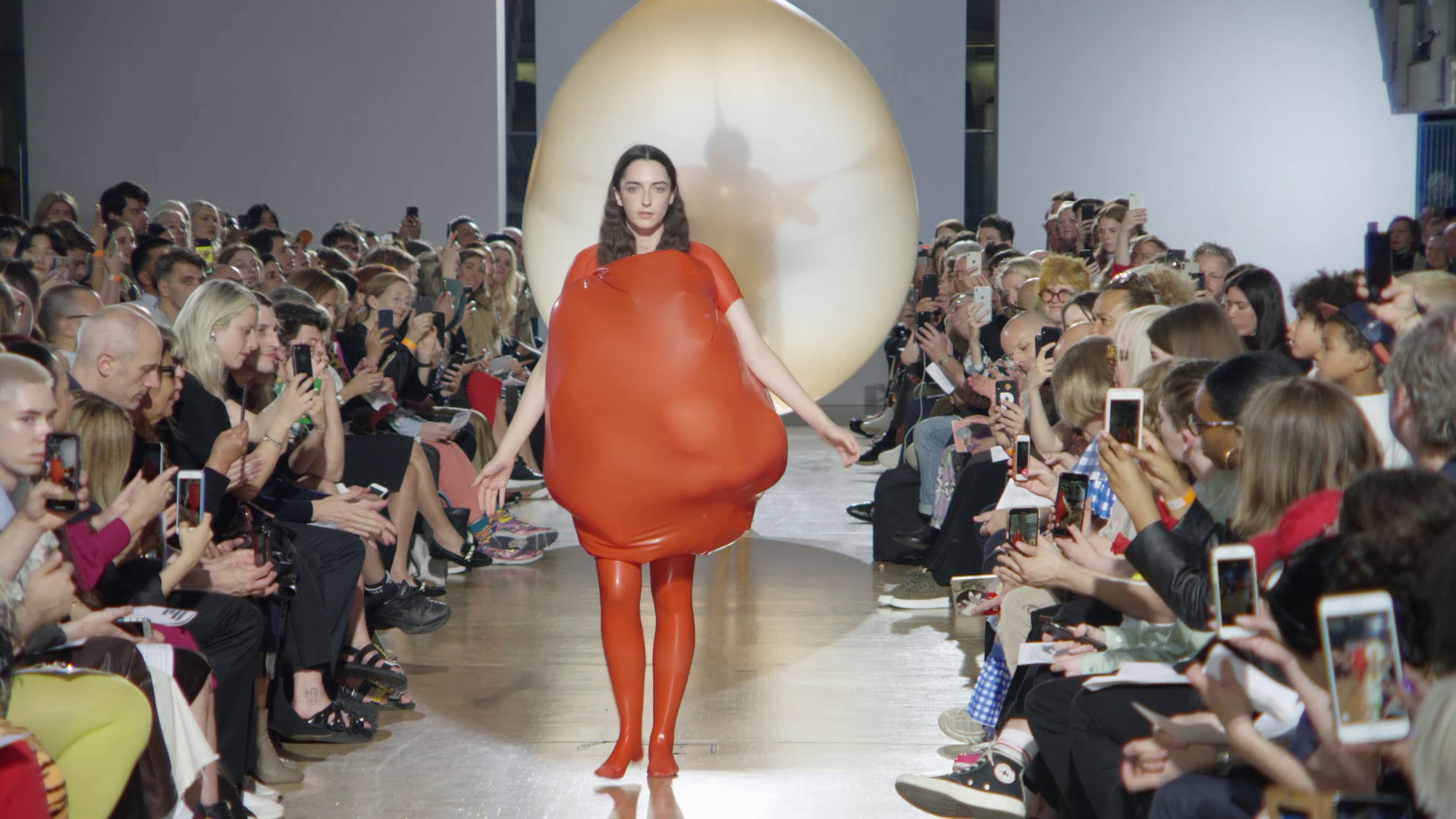 “I’m trying to research what my practice will be – I really want to shape a strong vision within my practice. I do find difficult – I don’t really like the idea of commercialising it, so I want to keep on doing this multidisciplinary approach.”

“But first of all I want to show this body of work in a space where I don’t have to compromise them,” he says. “At the presentation, I had to make the bubbles smaller, I had to compromise the transparency … and in that work there’s so much potential to explore lights, performance. I’m in the [process] of finding a space where I can do that – to have a big performance of movement and maybe with sound – so that’s what my mission is now.”