Lucie Davis Has The World At Her Fingertips 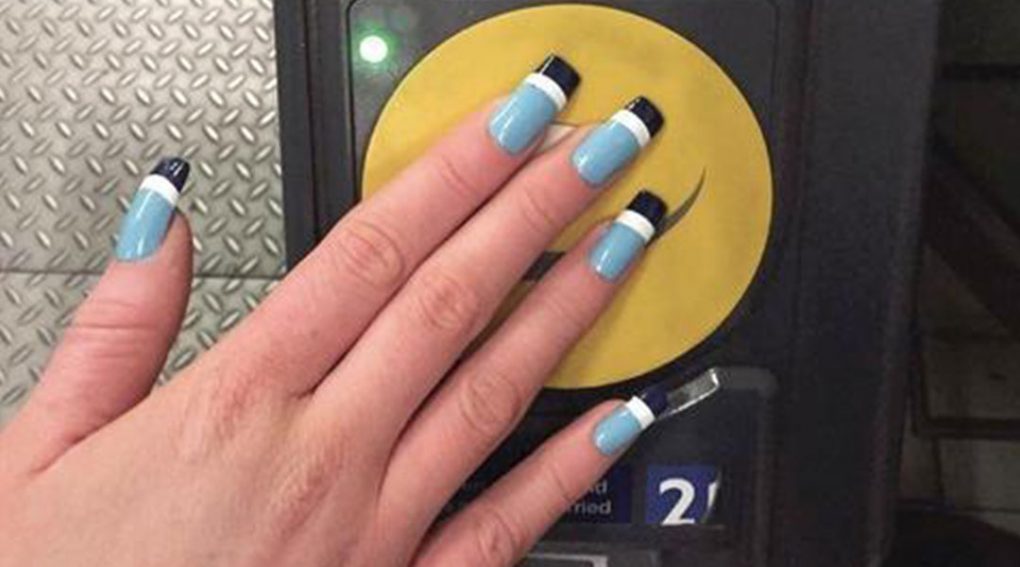 What if you could go in and out of a tube station, using just your nails? This concept doesn’t sound so hard to believe, once you have met Lucie Davis. In 2016, the 24-year-old British jewellery designer fashioned a set of acrylic nails that double up as an oyster card for her graduation project. Letting you “touch in and out of the tube” in London, Lucie’s brainchild stems from her idea of making jewellery light-hearted and approachable.

Her initial love for accessories grew while exploring the intimate relations a trinket can have with its wearer. “I never really took the traditional jewellery design approach. I wanted to question our relationship with these objects. I was more interested in changing that perspective,” explains Lucie.

Inspired by Alexander Mcqueen as a child (“I loved how he broke boundaries”), Lucy was always busy creating things and sketching her ideas on paper. Graduating out of Central Saint Martins in 2016, her final project with the “oyster nails” thrust her into the international spotlight. The RFID (radio frequency identification) chip in the cards found its way into quirky nail art thanks to hours of trial-and-error. “I love looking at things that seem mundane but can offer so many possibilities. It’s all about bringing a bit of magic into everyday life,” says Lucie. This sense of creating unexpected moments with familiar routines landed her a host of awards including the prestigious MullenLowe “Your Nova” award for fresh creative talent and the Theo Fennell Prize for overall best jewellery collection at CSM (2016). “It was supposed to be this conceptual art piece,” she explains, “But it kind of blew up and everyone was like, ’Oh my god! This is the future!’”

But the media hype built more pressure, and the exposure also painted a target for scrutiny. Thus even Lucie, with all her innovative work, faced criticism. “When the BBC shared my video, there were guys on social media saying that it’s so sexist. I realised you can never make everyone happy. If anything, I want my work to be inclusive, I want to bring people together. I have cried reading those comments before. But with time, you grow a thick skin,” she says.

There’s also the ever-present question of pricing and tuning one’s creativity to the real commercial market. After the initial brain waves have been converted into brilliant inventions pricing them prove to be a major roadblock. “For a designer, who’s not that confident, it’s hard to put a number on things. You don’t want it to be expensive as it just secludes people, but then you want it to be desirable as well,” she says. So how does she solve the dilemma? “You ask friends how much they would pay for it. You see how other people are selling their designs. It’s a learning curve.” Her collaboration with Topshop, that resulted in a temporary freckle tattoo, traced from her own freckles, were priced at £8. But sometimes, money overrides the adulation her creations get her. Other than winning the Freedom at Topshop X CSM Student Collaboration award, she received a message saying, “I never loved my freckles until now. Thank you for making me feel so empowered!” In her own words, Lucie couldn’t be more grateful. “All my work, I don’t do it for myself, I do it for others. That’s why it’s always interactive. I only want to create things that are positive,” she says.

Currently working in advertising at Ogilvy & Mather, Lucie isn’t the conventional designer, but more of a conceptual story-teller. With a sharp eye for detail, she translates all her experiences and observations into a functional design. Inspiration could be drawn from anything, be it witty fruit stickers in Waitrose, bus trips through uncharted routes or frequent visits to various art galleries. And, there’s also a serious case of FOMO. “This is so silly! My optician said, ‘Lucie, you have dry eyes. You should blink more often’. I was like, I can’t blink, what if I miss out on anything? I am so scared,” she giggles.

All her projects are an extension of her lively persona, with her unique design approach keeping things interesting even in the humdrum of a 9-5 routine. With a penchant for always shaking things up a bit, she creates 3D mockups as part of a desk job that would have only required dishing out Pinterest-y graphics. “I still like the tangibility of doing things. If people like your way of doing things, you have just gotta stay true to your part,” says Lucie.

She follows this ideology to a tee. Lucie’s multiple sketchbooks hold refreshing interpretations of all things that go unnoticed, trivia about mundane elements that she feels could be magical. Filled with witty doodles, funny graphics and interactive mood boards, coupled with her neat-as-a-pin handwriting, her diaries are a budding ground for everyday inspiration. “I am a bit of a hoarder. I collect everything. I write about them and you never know when a new idea might pop up. I am known for my sketchbooks. It’s like my little playground,” says Lucie.

No wonder Lucie falls into the mould of the quintessential creative, always on the lookout for untapped inspiration that could transform how design is looked at today. “I just want to produce something out-there and crazy, you know, that’s what gets me out of bed every day. If I didn’t have a creative outlet, I wouldn’t know what to do,” she signs off.

This article was originally published on 1granary.com